The line between sound design & music.


To this day I have never liked to listen to music on headphones, and can probably count on the fingers of one hand the times that I have actually done so. I’ve always felt that it’s vitally important to be aware of our sonic environment at all times, and if you tune into it  – it’s often a really rich and enjoyable experience. David Toop’s book ‘Ocean of Sound’ – talks very eloquently about environmental sound being a natural form of music. That idea has always stayed with me.

I was recently asked to work on an short film for cameraman Daniel Haggett, showcasing his work with some recently purchased equipment. The brief was to provide a soundtrack that draws the viewer through the 3 minutes of images. The overriding theme was that of dislocation in an environment, being in a place but not necessarily of it. Reflections, and a solitary sense of space around the individual played a major part in the imagery. I thought this would be a great opportunity to use just environmental sound design, and to find a natural music within that.

I used recordings from a number of different ambient spaces & pieces of equipment. Crucially, none of them were taken from any of the filmed locations; caves, jails, aircraft interiors and exteriors, air conditioning units, spacecraft launches, radio static, subway tunnels & humming motors.

I wanted to create a soundscape that made emotional, rather than audible sense. I imagined what our characters may be feeling and tried to translate that into a sound. I had to let go of what seemed correct, and trust in what felt right through experimenting. In some cases, mostly at the beginning and end, it comes close to traditional music, you can hear what seems to be tuned notes. These are actually resonances created by distant industrial motors. I pitch-shifted them on different tracks to produce long, evolving tones which became thematic to our two characters drifting through their environment.

In other cases, I would create motion within the sound by manipulating the EQ, pushing frequencies and automating their movement. It’s a subtle effect but it serves to move you through the sound.

My hope is that the ‘nearly but not-quite-right’ ambient sound is subconsciously accepted, drawing the viewer into our characters’ internal experience in those environments.

After this we tried a different angle.


Although the piece felt interesting to watch, the ambient soundtrack didn’t necessarily do the job of drawing you through the film. The intended audience for the piece was to be potential future employers; directors & producers. Typically these people will have very little time on their hands and will be getting lots of solicitations daily. It became apparent that the soundtrack needed to be more attention grabbing throughout. A developing piece of music will do exactly that, so the question was now- what instruments will express the intention of the film ?

A few days later I was walking back to Kings Cross from a meeting in Soho. I like to try and find a different route each time and this time I stumbled on Hobgoblin Music, an instrument shop aimed at the folk world. I popped in to try out guitars, and 10 minutes later an extended rain & hail storm left me marooned inside the shop for a good 40 mins. I started tinkering with various instruments- amongst them was a small Steel Tongue Drum. 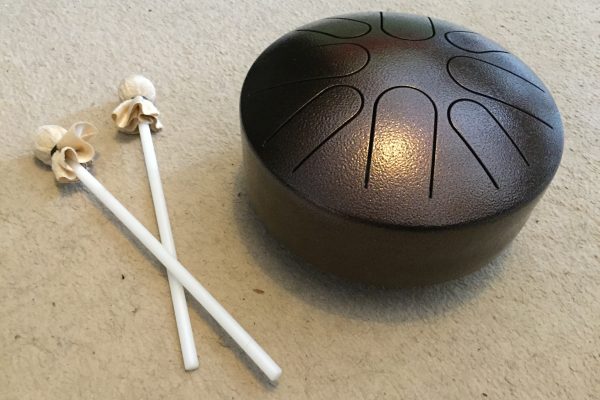 It had a haunting and hypnotic sound. It really drew me in and had the odd effect of silencing the noise around me. I suspected that this sound, that created an other-worldly intimacy despite being surrounded by a bustling city, was going to work really well for the film.  I find it fascinating how we apply one sense to another, ‘this sounds how that looks’ etc… I think it forms the basis of much of the expressive arts. If you’re interested in this kind of thing you might enjoy reading The Tell Tell Brain.

So after a bit of nifty chat from the shop salesman, I walked out with 3 of them and a really resonant Kalimba.

I set two of these drums up in front of the screen and began to improvise to picture, it instantly fitted really well with the mood. The pulse it made nailed the visual language very effectively. Once that essential element was in place, building up around it was just a pleasure. You can actually hear me grunting in-between phrases on the Tongue Drum near the beginning, I’m hoping I got away with it :)

A Moog Voyager provided the deep bass, the Kalimba provided the melody, a muted tambourine skin provided the occasional beat, a Sequential Prophet 6 created some unusual pads,  and elements of the original sound design stayed in place, including the opening. From here it was matter of sculpting around the picture, making an effective transition to the second character and space, and bringing the original thematic material back to create a common thread and conclusion.

I think it’s a more accessible version, and more successful in achieving what the film needed to do.

So there you are, two identical films with totally different approaches to the soundtrack.

Which do you prefer ?